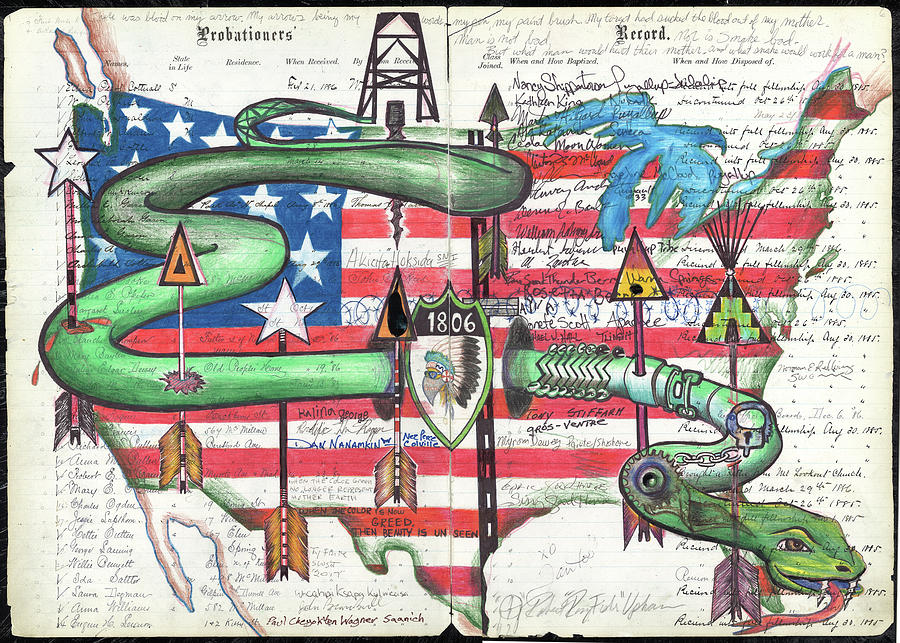 1806 Green Snake Ledger
“The Green Snake 1806 ledger was created during my three months in Standing Rock during the winter of 2016-2017. The green snake reflects the green color of the Dakota Access Pipeline. The snake in the ledger goes from the oil wells at its tail to its terminus in the ocean at its head. The gears of progress, the chains of slavery and the drills of the oil rigs are represented within its body. Along the way, the creature of progress is pierced by the arrows of the Oceti Sakowin (7 Council Fires of the Lakota Sioux). The Great Lakes are represented by the Eagle. The 1806 in the ledger refers to North Dakota Highway 1806, which goes through the Standing Rock reservation. The Backwater Bridge on the 1806, was the site of the major confrontation between Water Protectors and Morton County Sheriff’s Department. It also reflects the years in which the Lewis and Clark “Corps of Discovery” came through our land, bringing with it the first waves of “progress”. Names on this ledger include 1880 records from a Methodist church, as well as signatures collected from people who supported the actions in Standing Rock. Notable signatures include members of the Puyallup Canoe Family , i.e. Cedar Moon Woman (Connie McLeod) and Nancy Shippentower as well as Dennis Banks, founder of the American Indian Movement.” Robert “Running Fisher” Upham, aka Harlem Indian