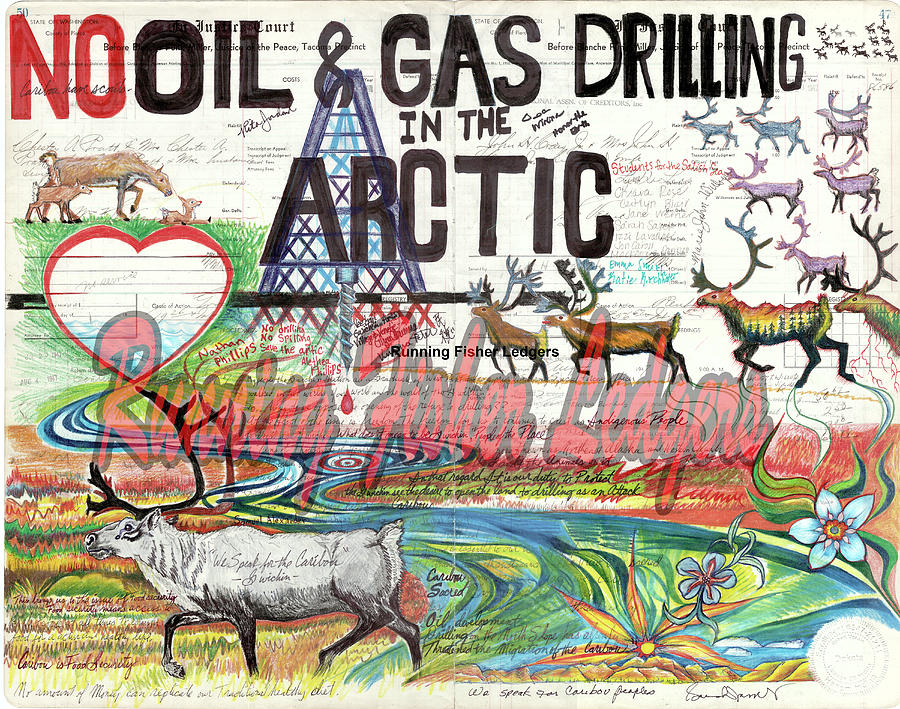 Caribou No Oil and Gas Drilling
The Sacred Place Where Life Begins
The Gwich’in people call the calving grounds of the Porcupine Caribou herd Izhik Gwat’san Gwandaii Goodlit—“The Sacred Place Where Life Begins.” The place where conditions are perfect for giving birth lies within the Arctic National Wildlife Refuge. Sarah James, Gwich’in Nation elder, has been speaking for the caribou for many years, speaking out against allowing oil and gas drilling in the middle of this sacred area.
“I was a participant in the Peace and Dignity Run in 2000, and Sarah James hosted us as we flew in from Denver to Arctic Village, which is a community with no road going in or out, only accessed by bush plane out of Fairbanks, Alaska. While there, I was fortunate to be along on a caribou hunt with the elder named Moses Sam. This was a once-in-a-lifetime experience. I feel honored to put together this ledger on behalf of the caribou and the Gwich’in Nation. The ledger came into being when Sarah called me to let me know she was doing a speaking tour of our area. I was so glad to provide transportation and reciprocate the hospitality that she had offered me years earlier. This work was initiated with that phone call.
The most recent version of this ledger includes many signatures, but those of which I am most proud are two women for whom I have the highest regard: Sarah James and Winona LaDuke. Winona is director of a program called “Honor the Earth”. She was picked Woman of the Year by Ms. Magazine in 1998, and she ran as the Green Party Vice Presidential Candidate with Ralph Nader in 1996 and 2000. Winona LaDuke is an activist for all causes Indian. Both of these strong women leaders understand that to advocate for one of our causes is to advocate for all.”
Robert “Running Fisher” Upham