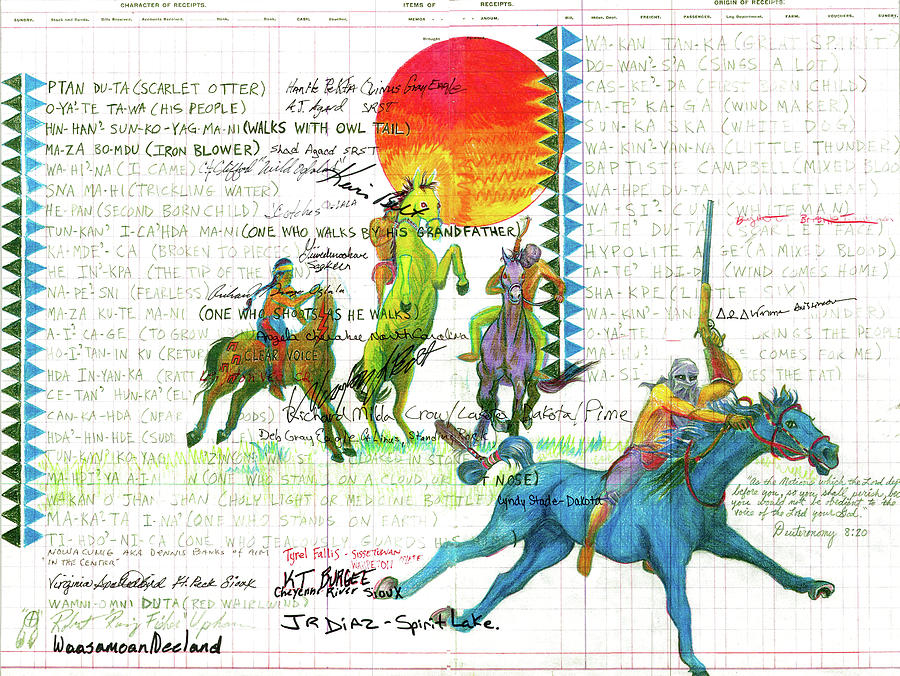 “If they don’t like it, let them eat grass,” were the words of the trader in charge of rationing out the food to the Indians . As a concession to lands ceded or agreed upon for white settlement, the U.S. Government made a promise of money and food to the Dakota families, who by this time were both farming and hunting on a greatly reduced land base. In 1862, after a couple of very bad winters followed by crop failures and shortages of game, the people were starving. Food stored in government warehouses piled up while the accompanying money was delayed, and that which was rationed out was often spoiled. When one of the mothers commented that the meat was spoiled, the reply “..eat grass” was overheard by an Indian who understood English. This brought anger to the families. As the families continued to starve, an incident happened over eggs and a farmer. This incident caused a death, and led to the Dakota Sioux Uprising that left almost 600 soldiers and settlers dead.
As a consequence of this Sioux Rebellion, President Lincoln was going to hang over 300 Sioux warriors. In order to appear more “compassionate”, he reduced the number to 38, including by all accounts at least 2 people who were not involved in the uprising. This hanging took place in Mankato, Minnesota on Dec. 26 1862. A day after Christmas.
The artist Robert “Running Fisher” Upham is an enrolled member of the Lake Traverse Sioux. He drew this Ledger art to honor his relatives who gave their lives as a result of a grave misunderstanding and lack of respect for justice.
Text by Sacred Point of View

Congratulations on your recent sale!