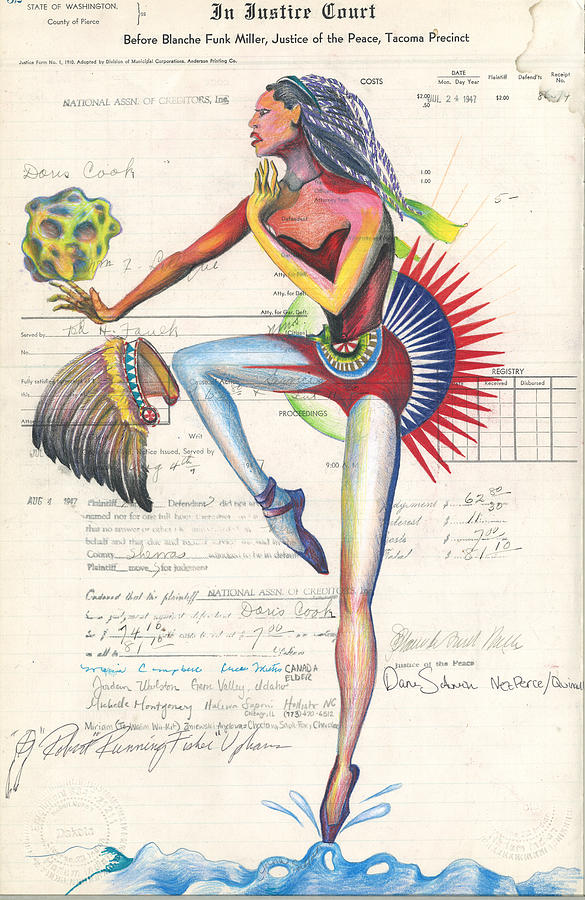 Maria Tallchief in Orpheus
The New York Ballet Company was founded by Ballanchine and his wife, Maria Tallchief. Maria Tallchief is an American Indian woman of the Osage Nation in Oklahoma. She is America’s first Prima Ballerina. Robert chose her for this ledger to benefit the aspirations of young American Indian girls. He wishes that through his art, American Indian contributions will become more visible and celebrated.
This image shows Maria Tallchief in her most famous role, one which was created to highlight her distinctive style. In the story the Lord of the Underworld is entranced by the emotional power of her dancing, and kidnaps her into the underworld to dance and dwell forever. Her husband Orpheus follows her into the underworld, plays his violin to charm the Lord of the Underground, wagering with him in order to bring her back into life. The Lord finally agrees, with the stipulation that she must follow Orpheus and he must not look back. At the very last minute, when he can’t hear her footsteps, he looks back and she is lost to him forever, although she continues to live and dance in the unseen world. A person seeking to draw inspiration from this story could draw the conclusion that our women are vitally important to our spiritual reality, and that as life may imitate art, we ask for those who value our culture to join with us in protecting and nurturing our girls and women.
Some of the symbols incorporated into this piece are drawn from traditional spiritual practices—the bustle and feathers, represent that she is a dancer who is the pride of all Indian Nations. The lava rock is drawn from our sacred inipi (purification ceremony). The rocks come from deep in the earth, flowing out like a river of fire, then cold to the touch until heated to red hot, uniting with steam which rises as prayer as the stone receives a sprinkling of water.
After Robert finishes a piece, it continues to have a life, as signatures are added. In this case, a young Nez Perce ballerina saw this ledger and loved it. Robert had her sign it, but more than that, he gave her permission to make copies for her fellow dancers, adding their signatures and giving them a copy to keep.

Congratulations on your sale, Robert!